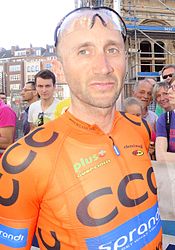 Davide Rebellin (born 9 August 1971) is an Italian professional road bicycle racer, who currently rides for UCI Continental team Cambodia Cycling Academy. He is considered one of the finest classics specialists of his generation with more than fifty top ten finishes in UCI Road World Cup and UCI ProTour classics.

Rebellin is best known in the cycling world for his 2004 season, when he won a then unprecedented treble with wins in Amstel Gold Race, La Flèche Wallonne and Liège–Bastogne–Liège. He has also won stage races such as Paris–Nice and Tirreno–Adriatico, and a stage in the Giro d'Italia. Rebellin served a 2-year suspension for testing positive for Mircera at the 2008 Olympic Games.