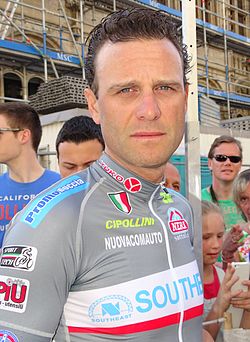 Alessandro Petacchi (born 3 January 1974) is an Italian former professional road racing cyclist, who rode professionally between 1996 and 2015. A specialist sprinter, Petacchi has won 48 grand tour stages with wins of the points jersey in the Giro d'Italia in 2004, the Vuelta a España in 2005 and the Tour de France in 2010. He also won the classics Milan – San Remo in 2005 and Paris-Tours in 2007. His career spanned over 18 years during which he earned 183 victories.

In 2007, Petacchi was banned from cycling and had his results achieved disqualified for doping. The court later said that he had not cheated on purpose but had not taken enough care when consuming his legal asthma drug. He announced his retirement as a lead sprinter on 23 April 2013, and terminated his contract at Lampre–Merida,. He rejoined the professional peloton in August 2013, joining the Omega Pharma–Quick-Step squad as a lead-out man. In 2015, he joined the Southeast team, where he retired from cycling for good after that year's Giro d'Italia.